This post is about one of my favourite subjects – dreams. Even if you never have nightmares yet you are interested in dreams and what they mean, read on…

Although nightmares are more common among children, apparently one out of every two adults have nightmares now and then – and between 2% and 8% of the adult population is plagued by nightmares.

Recently our two and a half year old has been having nightmares about the dragon from the famous book, Room on the Broom. As a child and teenager I always had vivid or lucid dreams but it’s only been over the last eight or nine years that I have developed a dedicated lucid dreaming practice, one that’s given my life a new richness and depth, one that has opened many doors in my soul.

Dreams and dragons? This was something I could help with.

And so, I actually shared a basic ‘shadow healing’ technique with our little girl recently. As you do. Within a week….whoosh…the dragon was gone.

Even if you don’t have children who have nightmares, this concept is a great way to approach any kind of fear, anxiety or phobia that manifests into a dream or within waking life too.

Now, I’m going to dive straight into what actually happened but if you’d like to read more about lucid dreaming and what I mean by ‘shadow work’, then there’s more to follow at the end of this post.

For those of you who haven’t read Room on the Broom, here is a picture of the scaly, wide-nostriled archenemy from Julia Donaldson’s magnificent book. 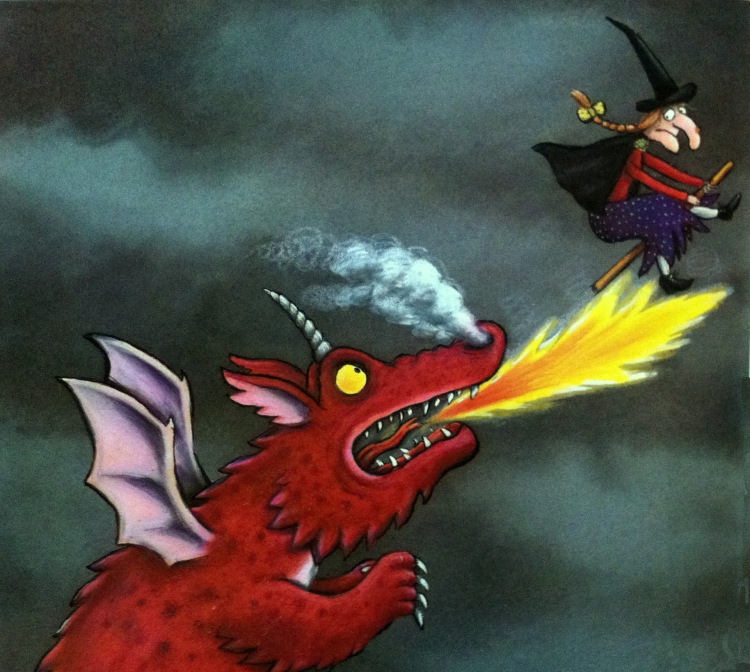 Although our daughter has loved this story for almost a year, it’s only been the last month that we’ve had refusal of this particular book and complaints about a dragon being in her room, both at bedtime and during the night. Pesky things, dragons. But now that our little girl is understanding more about dreams, I thought, what the heck – let’s try this! Last week when she mentioned the dragon before bed and I said:

“Do you know what Mummy does when she sees a dragon at night, I hug him and tell him I love him and guess what?”

“He disappears! and sometimes he hugs me back!”

“It’s important to say, I love you, and really mean it, here in your heart”. I repeated these instructions a few times over the course of the week.

I was worried this was a bit risky because I thought, what if she tries to hug it and something goes wrong? And then I thought, no, trust in love, trust in the experts and above all, trust in my first-hand experience of ‘shadow work’ and the fact that her subconscious will protect her if she’s not ready. (This is true! Whatever ‘shadow work’ you do within your dreams, your subconscious will only allow you to experience what you are ready to see.)

Then… a couple of mornings ago, she woke from an uninterrupted sleep, which is very uncommon, and rose for the day at 6.45am (usually its 5am or just before 6am). She was super calm and chilled and I just think, wow, we got lucky last night.

But then, later in the afternoon, she says: “Mummy I saw the dragon last night.”

What happened?! I asked, my heart beating faster.

“I gave him a kiss and a cuddle and said I love you dragon”. (I nearly cried!).

What then, I said… “He disappeared, Mummy” she said with a wide grin. Again, I nearly cried. (She’s independently recounted the same story a couple of times since.) I honestly didn’t think she was old enough to face such a thing, and she did!

Now, toddlers are generally rather unreliable sources at times, I wouldn’t place one in a witness box, but other times they are of course razor-sharp with their honesty. Either way, even if she was just saying this to impress Mummy, what an amazing concept for her to begin to grasp, something to apply in other walks of life, teaching her to be fearless in the face of dragons and showing her what love can do, and specifically, what happens when you direct that kindness and love within, instead of pushing the fear away. But I reckon it did happen, I really do, my instinct says she really did some ‘shadow work’, which is why she woke in a great state of mind.  She was so happy that morning. (Whenever I’ve had a lucid dream in general, and specifically if it’s been a shadow lucid dream, I’ll wake feeling blissful.) Now, I’m writing this two weeks later and we haven’t heard a single thing about the dragon. Not a peep. What a brave soul she is. This is my proudest moment in parenting thus far.

So it was that simple….

My instinct says Evelyn was lucid but even if she wasn’t, I think there’s a lot of power if you can influence your mind to think differently about how you face your fears. Even if you’re not a lucid dreamer (currently), I also think it’s possible to integrate your fears by doing a visualisation before bed. There are actually loads of tips in a book called Dreaming Through Darkness mentioned later on in this post.

So instead of fighting, rejecting or fearing the dragon, give the big softie a cuddle or show it some love and acknowledgement in your own way.

I’ve learnt some great techniques from my lucid dreaming teaching Charlie Morley. His workshops, retreats and books have been life changing for me. Charlie is a brilliant teacher and has written three incredibly insightful books on the subject. Most recently, I’ve been reading his ‘Dreaming through Darkness’ book, which is all about integrating the ‘shadow’, largely through dreams but in waking life too.

Let’s go back a couple of steps…. if you haven’t heard of lucid dreaming before, let me explain. Lucid dreaming is when you’re aware that you’re dreaming, which enables you to have a gentle influence over your dream. Many adults have lucid dreams but may not realise what they are (and the potential they hold) and most children will inherently lucid dream. As you get older, many forget or loose the ability. But it’s like riding a bike and if you’re interested in starting a lucid dreaming practice, it all starts with dream recall – keeping a dream diary and trying to remember your dreams.

I won’t go into any further detail about it here, that’s another blog post, but it’s helped me over the last ten years or so during important crossroads, with creative projects and with my spiritual practice. Whether you’re interested in simply flying, meeting a famous heartthrob, learning how to breakdance or visiting far-away lands, lucid dreaming can be such a wonderfully rich and exciting way to spend your sleeping life. Plus, whatever you do inside a lucid dream, such as repeat positive affirmations, meditate or practise yoga – the benefits of this action will be amplified. I forget the exact statistic but it’s several times more powerful to do a positive deed in a lucid dream than if you were to do the same things unconsciously within a regular dream!

My teacher Charlie Morley is far better at explaining what lucid dreaming is here in this great You Tube Interview.

One of the many things that lucid dreaming has helped me with has been healing past traumas. When I say trauma, it isn’t always necessarily something huge. We all have some sort of trauma from our past, whether we’re aware of it or not: anything from relationship breakups or grief to things we’ve seen or experienced that hasn’t been dealt with.

The fall-out is often stored-up, sometimes in the form of repressed or suppressed emotions, that live in our subconscious. Carl Jung named this our shadow self – the place in our minds where our rejected traits such as anger, fear and shame are stored.

When we say ‘shadow work’, it simply means trying to integrate any fears, phobias or charged emotions that have been repressed or not dealt with.

So if you do some healing work, such as hugging a scary dragon in a lucid dream, you will have done some really deep and gentle healing. What I found most empowering about all this is that this technique enables you to heal and help yourself – to become your own therapist.

Here, Charlie talks about nightmares and lucid dreaming in his Ted Talk.

From a very young age, my Dad always had an enthusiastic interest in my dreams. This was great training and I’m convinced the reason why I’ve always paid so much attention to my dreams, and also why I’ve always remembered so many of them.

I’ve learnt that by writing down your dreams you’re more likely to be in touch with your ‘hidden’ self, your subconscious. There’s a goldmine of creativity and potential down there, so I feel it’s really important to be in tune with your dreams.

If you have a small child, ask them about their dreams every morning. I’m pretty sure that because my own father did this with me as a child, it’s meant I’ve always had a very good relationship with my dreams.

If my two and a half year old can hug a dragon, the thing she feared most, then I believe this can work for anyone. Seize the day, seize the horns of your biggest fears and give it all your love. Don’t fight it, push it away or hide from it. Love it. Integrate it into your being – turn the darkness into light.

If you liked this post, you might also want to check out that time I went on a Lucid dreaming Retreat on the magical Holy Isle.

3 thoughts on “Nightmares: How to Handle Dragons”